How to pronounce S in the middle of a word?

When the consonant S is between two vowels, the letter S is pronounced Z such as in “valise” and “oiseau”. To break the /z/ sound in French words, the rule is to add a double SS.

For example, words like “tasse” or “classe” have a double SS and therefore are pronounced with the sound /s/ :

Of course, there are other cases where the letter S is pronounced as /z/.

Master Your French blog covers a wide range of topics related to French pronunciation, listening, culture, and much more. Among many articles, you can learn about French silent letters such as the silent h.

This article is about the specific case when the letter S is between two vowels. To learn more about this topic check the guide to Silent Letters in French.

Watch the right way to pronounce S in French

In addition, discover similar words that have different meanings when having a single S or double S. This is how you’ll learn how to correctly pronounce the letter S in words like “poison” and “poisson”, “désert” and “dessert”.

Click to watch Watch this video The Right Way To Pronounce S in French: 5 Similar Words But Different Meanings. 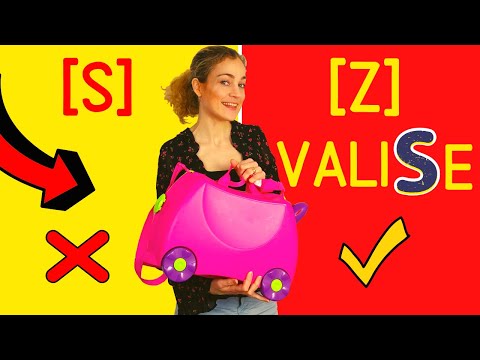 In the following, you’ll find a list of words that have similar spelling but their meaning is very different. In terms of spelling, every pair of words have one word with a single S and another word with a double SS.

The word cousin in French refers to a child of one’s uncle or aunt. It has the same meaning in English as in French. In addition, the pronunciation of the letter S in French is similar to how it is pronounced in English.

In the word “cousin”:

In French, there is a word that has its spelling very similar to “cousin”. It is the word “coussin”. While both words share many common letters, their meaning is totally different. In fact, “coussin” means pillow.

In terms of spelling, the difference between the word “coussin” and “cousin” is that:

Another pair of words in French that have their spelling similar is “désert” and “dessert”. The word “désert” means the desert. As for “dessert” it means dessert in English.

Let’s take the sentence: “Je mange un dessert dans le désert” (I eat a dessert in the desert). You can spot the two words “dessert” and “désert ” in this sentence.

In terms of pronunciation, the S in the word “désert” is pronounced as a /z/ sound because the letter S is between two vowels (e).

On the other hand, “dessert” has a double SS which results in the phonetic sound /s/.

The word “ruse” in French refers to cunning, a cunning fox. If we take the word “Russe”, which means Russian, it is clear that both words are similar in terms of spelling.

Here is one sentence that has both words: Ce Russe ruse (this cunning Russian). This is another situation where the letter S in “ruse” is between two vowels, the U and the E.

The only difference between “poisson” and “poison” is that the former word has a double SS while the latter has a single S. As we saw in the previous example, whenever an S is between two vowels it must be pronounced as /z/. This is the case of “poison”. In order to make a /s/ sound, a word should have a double SS. It is the case of the word “poisson”. So be sure to write “poisson” with a double SS, otherwise, you’ll be referring to poison!

The last example in which a single s between two vowels is pronounced /z/ is the word “lisent”:

Pronunciation and exceptions with the letter S

There are some words that are written with a single S but are pronounced with the sound /s/. Let’s see some of these exceptions.

Exception 1: After the prefix “R”

The word “resaler” has a single S but this s is pronounced as /s/ (not as /z/). Resaler means to add more salt.

Exception 2: After the prefix “A”

“Asymétrie” is pronounced with an /s/ regardless of having the letter S between two vowels. Asymmetry is the meaning of “asymétrie” in English.

Exception 3: After the prefix “Para”

After the prefix “para”, the letter S is pronounced as /s/ even if it is located between two vowels. Here is one example “parasol” (beach umbrella).

Keep learning with Master Your French by becoming a member and accessing a collection of online courses.

2 Responses to “When does S Sound like Z in French?”