How to say the letter H in French?

The letter h is not pronounced in French. This letter is a consonant and it doesn’t make any sound. Therefore, words that start with the letter h, such as honneur, hiver, and hier, are pronounced without the sound h.

How many types of H exist?

There are 2 types of letter h:

The mute his found in words that often come from Latin whereas the aspirated h is found in French words that have Germanic roots, the Franks, as explained in this book.

Is there any difference between the aspirated H and the Silent H?

In modern French, both of the aspirated h and the mute h don’t make any sound. They are voiceless. However, the difference is how each of them interacts and impacts the words next to it.

In detail, we often refer to two main behaviors that are part of the core of the French language and French pronunciation. The first observed behavior is elision and the second one is liaison.

The elision is when a word such as le and la is contracted. For example, le and la contracts to the form of l’. The liaison is when the final consonant of a word (muted) is pronounced together with the initial vowel of the following word.

What is an aspirated h in French?

An aspirated h is a silent French consonant that has the following two characteristics:

What is a mute h in French?

The mute h is also a letter that is not pronounced in French. Unlike the aspirated h, it is required to make the liaison and the elision in French words that have a mute h. For example, l’horloge (elision is made) and les habits (liaison must be pronounced). Again, these differences are mainly due to word origins and how the French language evolved through history.

A Video about the French letter h

Watch the following video to learn everything you need related to the French Pronunciation of the letter H.

In this video, I explain in French the difference between mute h and the aspirated h.

You’ll learn the rules of elision and liaison in front of these two types of h letters that don’t make a sound!

This video covers many French words that start with an h. It includes common French words to make sure that you fully understand their pronunciation.

More importantly, you’ll discover the cases where the process of contraction and/or liaison apply for French words that start with the letter h. 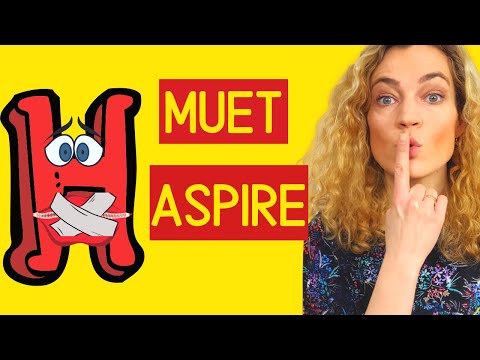 How to pronounce words with a mute H?

As mentioned earlier in this article, the rule is simple. The letter h doesn’t make any sound in French. However, what you should be aware of is to make the liaison and to apply the elision.

Let’s see some words in French that start with a mute h.

Héroïne starts with a mute H

In addition, the plural form of l’héroïne is “les héroïnes” and, in this case, the right French pronunciation is “les‿héroïnes”. When pronouncing “les‿héroïnes” you should make the sound /z/.

A verb that starts with a mute H

Similar to the word “héroïne”, “habiter” is a French verb that means “to live”. For instance, j’habite à Paris (I live in Paris). As you notice, the elision takes place between je and the mute h in the verb “habiter”. When we conjugate the verb “habiter” in the plural the liaison must be made. For instance, “vous habitez” is the plural form of this French verb and its correct pronunciation is “vous‿habitez”. Again, the pronunciation includes the phonetic sound /z/.

The takeaway from this example is that the elision and liaison must be made when an h is silent in either a noun or a verb in French. The elision takes place with words such as je, la, le and the liaison requires to pronounce the sound /z/ with the plural form of a noun or a verb.

Check the following article if you’d like to learn more about other cases where the sound /z/ is pronounced in French: When does S Sound like Z in French?

Some French words which begin with a mute h

What applies to the word “héroïnes” also applies to a large number of words that start with a mute h. You’ll find below a list of 10+ French words that follow the same treatment as “héroïnes” in terms of elision and liaison.

French words with a mute h where the elision and liaison must be applied:

How to pronounce Words with an Aspirated H?

The aspirated h is also not pronounced in French. But what’s proper to the aspirated h is the absence of the liaison and the elision. Words such as le, la, je stay as they are. They are not reduced to l’ or j’ as in the case of mute h.

What might be confusing with the aspirated h is its name. It is called aspirated, in French aspiré, but there is no aspiration that happens when pronouncing the aspirated h in French. The aspirated h has a totally illogical name. The only thing to keep in mind that “aspirated” doesn’t represent an aspiration, instead, it is about the absence of the sound.

Héros starts with an aspirated H

As we saw earlier, “héroïne” starts with a mute h. What’s interesting is that the masculine form of “héroïne”, “héros”, is a French word that starts with an aspirated h. What does this mean?

Another note is that the aspirated h prevents the liaison anytime between the final consonant of a word and the first vowel of the following word. This is the case in “les héros” as well as in other cases with the word héros. For example, “nos héros” /noeʀo/is the right pronunciation.

A verb that starts with an aspirated H

Now let’s take an example with a verb that starts with an aspirated h. The verb “hurler” in French means “to scream” and the h in this word is an aspirated h. When you say “je hurle” (I scream) the pronoun je doesn’t contract to j’. Also, the plural form of hurler is “vous hurlez” (pronounced /vu.yrle/) and its correct pronunciation is without any liaison. Don’t make the sound /z/ when saying “vous hurlez” in French.

Some French words which begin with an aspirated h

There are many words that start with an aspirated h in French. You’ll find below more than 10 French words along with their singular and plural forms. As you’ll observe the elision is not made and you shouldn’t make a liaison when pronouncing these words in plural.

French words that start with an aspirated h:

How to know if the H is mute or Aspirated?

Unfortunately, there is no way to know if the letter h is a mute h or an aspirated h. There is no simple logic you could use or apply to guess if an h is aspirated or mute. You’ll need to learn this and build your French knowledge by practicing and by working on your listening skills little by little.

One tip is that with some words, it is obvious that making a liaison, whenever there is no one, in reality, sounds wrong and, consequently, can change the intended meaning. For example “les héros” vs. “les zéros” (heroes vs. zeros) or “les hauteurs” vs. “les auteurs” (heights vs. writers).

Another tip, in the dictionary, whenever you look for a word that starts with an h  you’ll see an asterisk (*) in front of words that have an aspirated h.

A last interesting note is that you’ll find a vowel in every French word that starts with h.

When the elision is applied:

It results in the contraction of

When liaison is pronounced:

It results in pronouncing the sound /z/

In this article, we covered the silent letter H (mute and aspired) and when to apply the liaison and elision.

Master Your French blog covers a wide range of topics related to French pronunciation, listening, culture, and much more.

If you enjoyed the content of this article as well as the video you can also check our article on silent letters in French. Please subscribe to the newsletter so that you don’t miss future blogs or offers.

No wonder French pronunciation can be difficult. Keep learning with Master Your French by taking our online French courses.