From the Eiffel Tower to the French Riviera, from the Grotte de Lascaux to the Mont Saint Michel, France is a country renowned for its history, beautiful architecture, and a plethora of must-see sights. In fact, France is the world’s number one destination for international guests, and Marseille was named the 6th top trending destination for 2020.

Discover below these beautiful French cities, their most charming city centers, their famous monuments, and yearly events. Our top destinations include:

You can watch this video below to virtually explore these French cities and their most famous monument.

When you’re ready to start planning your next vacation, here are France’s 10 biggest cities to help you with your trip once travel restrictions are lifted.

Paris is the capital and the largest city in France:

Paris is the second-largest French-speaking city in the world. With an estimated population of over 11,020,000 in 2021 Paris is the only city in France with a population larger than 10 million.

Paris is the source of inspiration for some of the most famous poets, philosophers, and writers. La Seine, the river, divides the oldest part of Paris into two parts: the Left Bank (la rive gauche) and the Right Bank (la rive droite).

Best things to do in Paris

Marseille is the country’s second-largest city and is located in the South of France.

The city offers stunning coastlines combined with a wide range of things to see and do. Marseille is France’s oldest city. It was founded around 600 BC by a Greek colony. The commercial port is the biggest in France and one of the most important in the Mediterranean Sea.

Many locals speak with a distinct accent: l’accent Marseillais.

Popular points of interest in Marseille

Lyon is the third-largest city in France, after Paris and Marseille.

A simple historical reminder here: Lyon was the capital of France during the Roman Empire! The central part of Lyon was named a World Heritage site by UNESCO.

Toulouse is in the South of France.

With 2,000 years of history, the Pink City is home to three Unesco heritage sites.

Toulouse is the European capital of the aeronautics and space industry. The city was chosen by Airbus to establish its headquarters.

Toulouse is a beautiful city to visit, with the wide Garonne river flowing through the middle of the city and the red brick buildings in the center (giving it the nickname of the Pink City: “la ville rose“).

Toulouse and its points of interest

Nice is the fifth most populous city. Nice is located in the southeast corner of France between the Alps and the Mediterranean coast.

You can visit at any time of the year. Sun and sea make Nice a prime coastal destination in France.

Nice and its popular points of interest

Nantes is a city in Loire-Atlantique on the Loire, 50 km (31 mi) from the Atlantic coast.

Nantes has doubled in size since the 1960s. 25% of the agri-food jobs in France are located in Nantes and many of the leading manufacturers are based in the city: Biscuits St-Michel, Charal, and Fleury Michon for instance.

Tech Hub for the digital industries sector and other creative industries. Nantes offers an exceptionally high quality of life, a strong job market with a relatively low cost of living.

Must see places in Nantes

Montpellier is located in the country’s southern region.

It’s one of the few large towns without Roman heritage. Montpellier has many advantages: Mediterranean climate, slower pace of life, beautiful boulevards, and it’s cheaper than Paris.

Best things to do in Montpellier

Strasbourg is located next to the German border.

Strasbourg is a charming town which shouldn’t be missed! The city is today the seat to the European Parliament. The cooking has the best of French and German culinary traditions. Strasbourg is a unique and wonderful city to visit.

Must see places in Strasbourg

Bodeaux is a port city on the Garonne River in southwestern France.

This elegant city is well known for its wine, mild climate, and business. Bordeaux is listed as a UNESCO World Heritage Site for the beauty and uniqueness of its architecture.

Did you know? Bordeaux was voted the top city in the world for travelers in 2017? The city receives the accolade in Lonely Planet’s Best in Travel 2017

Lille is an hour and a half from London by Eurostar and located close to the Belgian border.

Lille is well known for its Flemish root and the use of brown and red brock. There is a focal point of interest at every turn.

Lille and its popular points of interest

French Cities and their Most Famous Monument

You’ll also discover one popular monument or event that takes place in each of these French cities. This may be useful when you travel to France or also in any casual conversation about France and its culture. 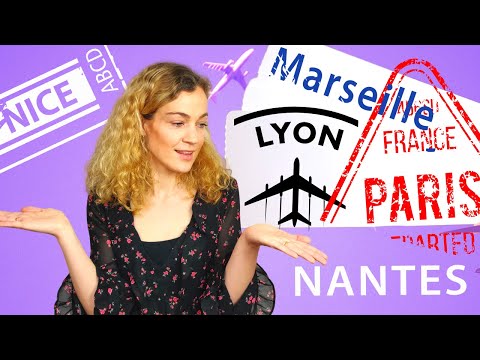 How is Paris different from other parts of France?

Consider Paris’s region as a set of several cities side by side. There are no big differences between Paris and other big cities. Nevertheless, you can find the following differences:

If you’re planning for an upcoming trip to France, nothing prepares you better than reading books set in Paris.

Level up Your French

I hope you enjoyed this virtual trip to France’s 10 biggest cities and that this article built more excitement for when you can visit these destinations in person.

To visit these cities, it’s easy to travel within France by train (TGV) or by plane. However, France is one of the countries where it’s recommended to speak the local language, and doing so makes traveling easier for tourists.

Once you get the right pronunciation and learn more about France’s culture you’ll sound more like a native French speaker.

Helping online learners and students and setting them up for success is essential at Master Your French. Become a member and learn French!