The amazing power of intonation: French audios and examples

Different languages have different melodies. To speak French efficiently you need to understand the melody of the French language. Melody is a very special kind of “glue” which holds the sounds together. Attempting to arrange the sounds with the wrong “glue” will result in structures of the wrong kind which will be unintelligible.

Each French speaker might interpret a sentence differently but there are some basic rules for different types of sentences. To help you gain mastery with the French intonation, we’re going to address the following points:

You’ll also find a list of audios to play with different intonation examples. If you’d like to know more about other topics related to pronunciation in French you can connect with me on YouTube or Instagram.

Intonation is produced essentially by vocal cord vibrations. It can be defined as the “melody” of language. Intonation means the pitch or tone of the speech. In French, each syllable has generally one tone.

One phonetic sound can have different sounds. For example, all /y/ sounds are not articulated in the same way within a word:

This is due to two different things: 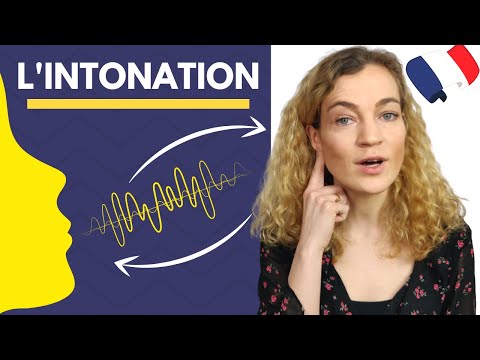 The main purposes of intonation

Processing sound is one of the most complex jobs that we ask our brain to do as explained by neurobiologists. Regardless of the language, many studies show just how much importance the human brain assigns to hearing.

Here are the four essential purposes of intonation:

The four main levels of intonation

Intonation levels can be used in many situations to show interest, express feelings, ask questions, or reveal attitude. There are essentially four different levels of intonation when communicating in French:

As in a song, the voice hardly ever stops on a syllable. It slides throughout the four levels, more or less quickly, in imperceptible degrees.

For example the sentence “il part demain” can be pronounced with three different intonations:

Intonation in French with declarative statements

French words coded with intonations and gestures can turn sentences into different meanings. Let’s start with sentences that neither ask a question nor express a command.

Tu peux. The utterance starts on a high note and ends on a lower one.

Tu peux faire. The pitch rises to a peak (“peux”) before falling to a lower level at the end of the group (“faire”).

These statements consist of a series of rises in pitch, all of which attain approximately the same level. It is the last syllable that represents the peak.

When we speak quickly the rhythmic group and the intonation change. Let’s see the same example when we pronounce the sentence quickly.

Questions which require an answer consisting of either “yes” or “no”.

Yes/no question may be formed in different ways:

Yes/no question are signaled by a sharp rise on the final syllable (“guette“). The declarative statement remains otherwise unchanged.

Listen to the difference:

The intonation is higher at the beginning “est-ce que”, the rest of the statement remaining unchanged.

The subject pronoun and the verb are inverted. (Formal)

The intonation is low at the beginning (“as”) and high at the end of the question (“guette”). The listener knows we’re going to ask a question because the verb comes first.

Intonation and information questions in French

These questions require an answer other than “yes” or “no”. These are called “information” questions.

Information questions begin with a high pitch on the question word (où, pourquoi, comment, etc.) and then gradually fall.

In a choice proposition, the structure of the intonation is symmetrical and gives a clue to the meaning of the connector, as in the following statements: “une pomme ou une orange?”.

More than one rhythmic group

Intonation with imperative sentences in French

For imperative phrases, the highest tone is at the start of the rhythm group (ex. “ne”). It goes down quickly until the end.

In the next rhythm group, the initial pitch is a little lower than the initial of the previous group.

How to learn the French intonation?

It is much easier to learn elements that are relatively easy to define for example French vowel and consonant sounds. In many cases, learning the right intonation and rhythm seems to be an after-thought.

Taking private French lessons is a great way to address students’ “deafness” to the melody of a foreign language. You need to practice intensively the newly-learned articulatory patterns in order to develop a “feel” for them and to be able to produce these sounds in the long-term.

If you’re learning French, sign up for the Master Your French email list and we’ll send you the new posts right when they come out.

Master Your French
4th of July week! Get-35% on the online course - Code: 4JUILLET
We use cookies to ensure that we give you the best experience on our website. If you continue to use this site we will assume that you are happy with it.Accept