The Rhythm of the French Language

The way people speak, how they stress time, and syllables can often reveal a lot about the language they are speaking. Even if you don’t speak the language, it’s easy to discern the language when listening to people speaking French, Italian, or English.

Rhythm in song lyrics is vital. Combined with intonation, rhythm can also boost language learning skills. Do you want to sound more French when you speak? You have to develop a French cadence!

Now that you know that language specificity and rhythmic structure go hand in hand, this article will provide the following elements to help you learn and apply the rhythm of the real spoken French:

The French language is widely acknowledged to be one of the most beautiful spoken languages. Its pronunciation is pleasing to the hearers, its intonation is melodious, its musicality is aesthetically pleasing, and its rhythm is unique, charming, and elegant.

Phonetically speaking, we can say that in French words don’t exist. French is a syllable-timed language. That means that all syllables in the spoken language take up approximately the same amount of time.

French words flow one word into another thanks to liaisons in French and enchaînement. A liaison occurs when the final consonant of one word may belong phonetically to the first syllable of the second word. The liaison can be obligatory, optional, or forbidden.

An “enchaînement” occurs when the final consonant or the final vowel of one word may belong phonetically to the first vowel of the second word.

Syllables in different languages can be variously stressed and unstressed. In French, each syllable takes up approximately the same amount of time. Note that in the previous examples only the last syllable is stressed.

Stress patterns occur in everyday spoken French, not merely in verse and poetry. French has very predictable stress: it’s mostly on the last syllable of the group of words.

What is a rhythmic group in French?

A rhythmic group is a group of words pronounced in a single breath and it often corresponds to one idea. The basic phonetic sounds in French are useful for many purposes. They aren’t for the words but the rhythmic groups.

A rhythmic group has the following characteristics:

Note that each group can have up to 7 syllables but this varies according to how quickly they are being spoken. If a sentence is spoken very quickly, some of the shorter rhythmic groups may be joined together. For example:

Below I give you a list of some general categories for identifying rhythmic groups in French:

Watch the video to improve your rhythm

Watch this video lesson that summarizes all the elements listed in this article. You’ll also hear the rhythm of spoken French with real sentences and examples. 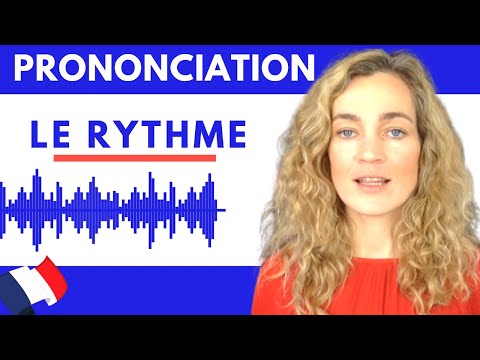 How to learn the French rhythm?

It is much easier to learn elements that are relatively easy to define for example French vowel and consonant sounds. In many cases, learning the right rhythm seems to be an afterthought.

Taking private French lessons is a great way to address students’ “deafness” to the melody of a foreign language. You need to practice intensively the newly-learned articulatory patterns in order to develop a “feel” for them and to be able to produce these sounds in the long term.

Try to pronounce the following sentences with equal syllables:

You just need to add the intonation to sound more natural.

The amazing power of intonation: French audios and examples

6 Responses to “The Rhythm of the French Language”