Required Liaisons in French: what they are and how to pronounce them

What is a Liaison in the French language?

How many and what types of French liaisons are there?

There are three types of liaisons in French. In fact, a liaison is not always made whenever a word ends in a consonant. A French liaison can be:

In this article, we’ll study the mandatory French liaisons and the sounds made by these liaisons.

Click on the following link to learn more about all the sounds in French with the international phonetic alphabet.

Conditions in which a liaison is mandatory in French

1. Mandatory liaisons after a determiner

The determiner can be in the singular form, in the plural form, or a numeral. The liaison is mandatory in French between the determiner and the adjective:

The word admirable is an adjective, you need to pronounce the liaison between the determiner un and the adjective admirable. The letter -n is pronounced /n/.

The liaison is mandatory in French between the determiner and the noun:

Let’s see more sentences where the French liaison is required.

After a singular determiner

The liaison is mandatory with a singular determiner such as un, aucun, mon, ton, son. For example:

After a plural determiner

The liaison is mandatory with the French numerals: deux, trois, vingt, cent. For example:

2. Mandatory liaisons after a pronoun

Between the subject pronoun and the following verb

The relevant pronouns that produce a liaison are: on, nous, vous, ils and elles. For example:

You need to correctly pronounce the liaison. Otherwise, you won’t hear the difference between ils aiment (they like) vs il aime (he likes).

After a complement pronoun

The liaison is required in French when the preceding pronoun is the direct or indirect object of the verb. For example:

With the pronoun en

With the pronoun en the liaison is required as in the following two sentences in French:

3. Required liaisons between an adjective and the following noun

The liaison is required between the adjective and the following noun. For example:

4. Required liaisons after a verb

Whenever a verb is in the imperative form, the liaison must be made with the pronouns en or y as follows:

Between the inverted subject and the verb in the interrogative

A liaison is mandatory in French between the inverted subject and the verb in the interrogative form. Here are two sentences that illustrate this specific case:

With impersonal il est and c’est

Another case in which a liaison must be made in French is after the impersonal il est and c’est. As indicated, the liaison is compulsory in what follows:

5. Required liaisons after a monosyllabic word

After a monosyllabic adverb: très, trop, bien, plus, moins.

Another situation to pronounce a required liaison in French is the monosyllabic preposition. For example:

Check the video below where I go over the mandatory liaisons in French: Mandatory Liaisons — Everything You Need to Improve Your French Pronunciation. 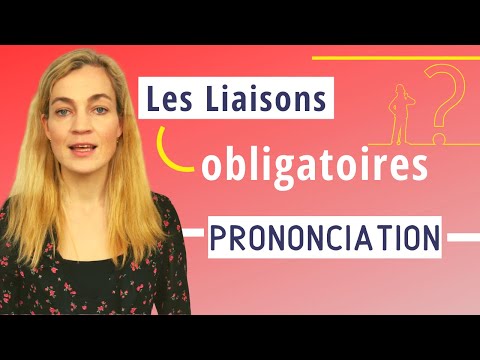 6. Mandatory liaisons within a fixed expression

The liaison is compulsory on the two following sentences

What are the sounds of the liaison?

In this article, we covered the conditions in which a liaison is required in French:

The image below illustrates the conditions around the required liaisons in French.

The best way to keep perfecting your French pronunciation is to think of this as progressive evolution that takes place over a period of time, and as you practice every day, the journey toward fluency in French continues to move forward.

9 Difficult Words to Pronounce in French