In this article, we’ll focus on the liaison between a French nasal vowel and the vowel of the following word. You’ll learn whether the full nasal quality of a nasal vowel is maintained in a liaison context or whether the vowels are denasalized.

What is a liaison in the French language?

A liaison in the French language is the pronunciation of a consonant sound between two given words, under certain conditions. The conditions for the appearance of a liaison are the following:

Examples of liaisons in French

Petit pain: The final consonant –t of the masculine, singular adjective, petit (small) is silent. It is not pronounced. In French, “petit pain” is pronounced /pəti.pɛ̃/.

Petit ami: In this case, “petit ami” is pronounced /pəti.tami/. The letter –t is pronounced when the adjective is followed by the vowel -a that is in the singular noun ami. We make the liaison, the consonant -t becomes part of the syllable at the beginning of the word ami that follows.

What Is A Nasal Vowel In The French Language?

In French, there are 4 nasal vowels:

In most of the regions in France, /œ̃/ has disappeared, it’s pronounced /ɛ̃/ instead.

To learn more about nasal vowels, as well as French sounds, go check our article on International Phonetic Alphabet for French.

How to pronounce the nasal vowels in French?

How to spell the nasal vowels in French?

The table below presents how to read and how to write nasal vowels in French.

Check the video below where I show you how to explain in detail the pronunciation of the French nasal vowels in liaisons. 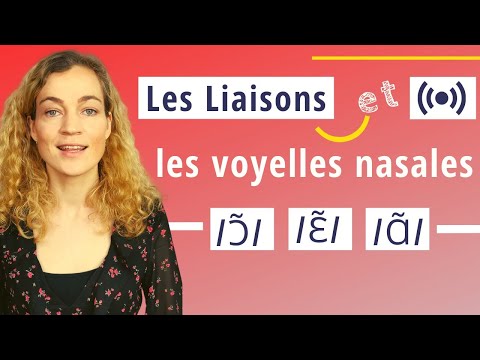 Conditions in which liaisons must be made

In the following, I’ll list the conditions in which a liaison must be made and others in which it must not. Some liaisons are pronounced except sometimes in familiar speech.

How to pronounce French nasal vowels in liaisons?

The liaison is pronounced as follows:

The liaison is required with:

There are some exceptions:

After a monosyllabic adverb, the liaison is usually pronounced. For example:

In the following sentences, the liaison is prohibited. In other words, bien doesn’t change the pronunciation in what follows.

With the word rien, the liaison in French is made as follows:

Otherwise, there is no liaison. For example:

In French, the pronoun on always links:

The liaison is forbidden between the inverted pronoun subject on and any following element. Here is one example where the liaison should not be made with on:

The liaison is required after the monosyllabic preposition en. Here are two examples:

Note that the liaison is not pronounced between the inverted pronoun en and any following element.

Have you ever wondered how to pronounce the letter S between two vowels? In French, the letter S has 2 pronunciations in the middle of a word: [s] vs. [z]. Check this article to learn when to pronounce S in french and when the S sounds like Z.

Denasalization with Liaison in Standard French

The liaison is compulsory, even in conversational usage, in the following case: adjective + noun.

Adjective ending with a nasal vowel

The word-final nasal vowel should not be followed by a silent consonant in the spelling of the word. For example, the word “temps” has three silent letters at the end: m,p, and s.

The cases of denasalization with liaison are related to a limited number of adjectives ending in /ɛ̃/ and /ɔ̃/.

It is important to note that it is the masculine singular forms here that are of interest, as the feminine forms of these adjectives all end in pronounced, fixed nasal consonants whether before a following vowel or a consonant. For example:

And that’s why there is no liaison.

The nasal vowel of the adjective is no more pronounced. Instead, you have to pronounce an oral vowel.

The liaison is pronounced as follows:

Here are some examples

In some cases, there is phonetically no difference between the masculine and the feminine. They have exactly the same pronunciation.

Beyond Liaisons in French

Master Your French blog covers a wide range of topics related to French pronunciation, listening, culture, and much more.

If you enjoyed the content of this article, keep learning French with Master Your French by subscribing to our YouTube channel.

Required Liaisons in French: what they are and how to pronounce them