Numbers, colors, months, food and greetings are often the first language skills that people aim to master when learning a foreign language. As they are widely used and omnipresent in our daily life, they play a crucial part in successful real-life communications. Regardless of the language, such basic vocabulary is a great place to start a language learning journey.

In this guide, we’ll cover the following topics around French vocabulary:

In many cases, every conversation is unique because it is associated with different people, different places, different levels of formality in the communication, and of course at different times of the day.

What are some common French greetings?

Here are the most common French greetings:

Some of these French greeting words can be used in more than one situation to say different things. Let’s see this.

How to properly greet someone in French?

As many French beginners, you may be wondering when to use Bonjour? When it is better to say Salut? When to switch from saying Bonjour to Bonsoir?
Questions from French learners

This is why I prepared a video, find it below, to teach you the French greeting pronunciation. I also published an article to help you learn French greetings.

These resources detail the most common French greeting words that you should absolutely know as well as some typical mistakes to avoid! Learn when to say Bonjour and Bonsoir and understand when to, and when not to, greet people in France!

The truth is that almost no one could imagine a world without numbers. We use numbers not only to communicate but to think, to memorize, and manipulate quantities.

We think about prices and numbers when buying anything. We calculate our spendings, estimate our savings, and measure our professional success by looking at performance numbers and promotions.

Learning to count from 1 to 100 in French can be divided into 3 steps:

The details of these steps are in the following lesson about numbers in French.

Would you want to learn how to count in French from 0 to 19?  The following 2 tables cover these numbers. You can read how the number is written in French so you can write correctly.

Numbers are frequently used in our day to day life. For instance:

An important note about the word “bouteille”. In French, “bouteille” is singular and feminine this is why we use une instead of un. “Croissant”, in French, is a masculine word and when it is singular we use un to refer to a quantity of one.

A video to learn French numbers

I’m sure that you’d like to master the pronunciation of French numbers, right?

I repeat every number so that you can do the exercise at the same time.

This is a great way to learn how to pronounce all French numbers up to 100.

Colors are also found in nature, in food, and part of many other things in our world. Colors play an important role in trends like clothing, fashion, beauty sector, pastry, and home decorations.

As any lesson about colors should, I’ll list the most common colors in French and then I’ll give additional examples for every color. 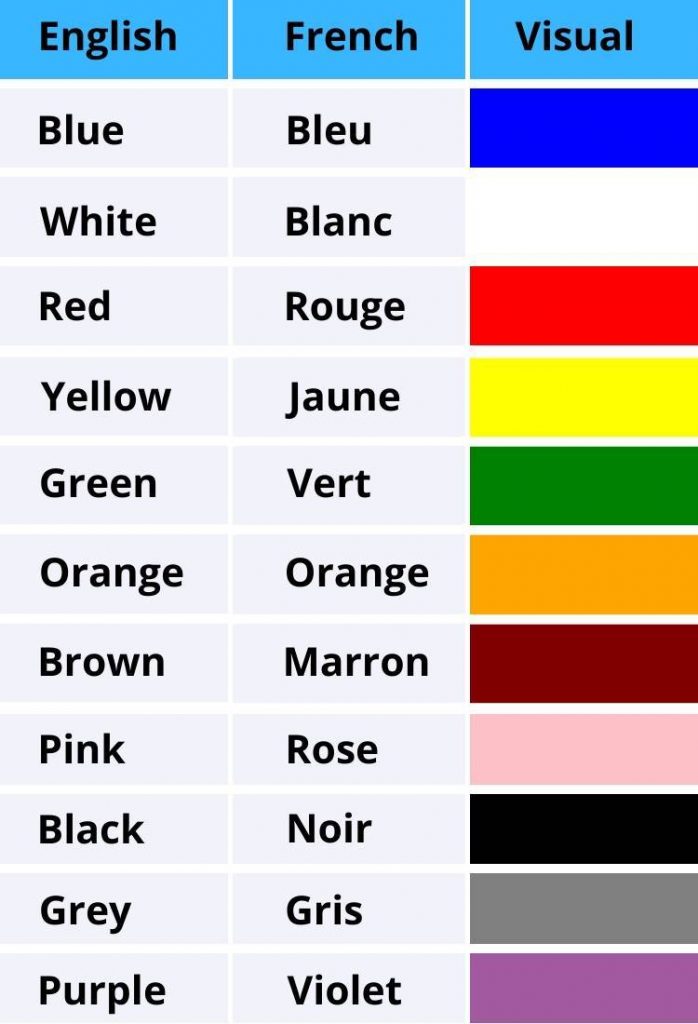 Here are 11 popular colors and how to say them in French along an example in a sentence:

A video to learn French colors and their pronunciation

Let’s continue talking about colors in French! This is another YouTube video where you can learn:

Check our article dedicated to learning colors in French. In that article, I teach you how to correctly write the French colors and master the basics of the French grammar rule of color/noun agreement with masculine, feminine, singular, and plural go to our delightful blog post on the same topic.

As everyone knows, there are twelve months of the year in French.

The following illustration lists the months in order from January to December and shows the correct way to write the French months’ names.

You already know that a year has 4 seasons. A season is “une saison” in French. In plural, a silent s is added at the end of the word. For example, les 4 saisons (the 4 seasons).

Audio recordings for months and seasons in French

Start building your vocabulary and learn the pronunciation of simple and easy French words.

This is one of the reasons you should check the complete article on how do you say French months and French seasons.

In the same article, you’ll find the audio recordings to learn then repeat the pronunciation of months and seasons in French.

Preparing and sharing food is one of, perhaps the essential, pleasures of French culture.  You have to know the French food vocabulary for eating healthy.

In the next paragraph, I’m going to give you four tips that will help you to eat healthily.

Click on the link to learn more about the vocabulary related to food in French and French habits. To make this easy for you, I prepared a video: the French food vocabulary for eating healthy. 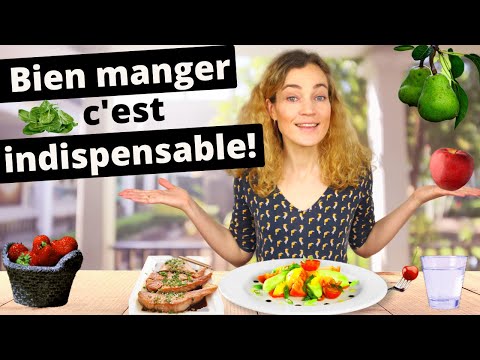 Every day we feel different emotions. You must learn to say what you like and what you dislike, knowing how to express joy, happiness, sadness or even anger.

I’ll show you a list of the most common emotions and their opposite:

You should also have a good understanding of variations for the same word. The verb aimer (to love) has a stronger meaning when used alone, while “aimer bien” (to like) means “to love a little bit” for example.

In France, we add to expressions of politeness “madame”, “sir” or the first name if we know each other well. If you don’t know someone well, you will say “bonjour madame Martin” or “bonjour mesdames” (ladies) if there are several of them. To get off to a good start and make sure you don’t offend anyone you need to learn the rules of politeness and the proper words to use.

Finally, in order to conclude a conversation, it is common to wish for something. So learn how to wish a good day, a good meal or a nice evening.

One of the favorite topics of any conversation is family. You must learn to describe your current situation. Are you married or single? Do you have children? One girl or several boys?

Below I give you a list of family members:

You can also learn and remember the following expressions:

Parts of the body in french

After emotions, parts of the body are one of the most personal things. You must therefore know how to talk about it and use the right vocabulary.

Knowing the parts of the body can be useful when consulting a doctor, playing sports, buying clothes …

I will list the most common words from head to toe below:

Now that you know the main parts of the body, you can go shopping and get dressed. The ideal is therefore to know the main clothes in French.

Clothing changes according to the seasons in France. In summer you like to wear:

In autumn, you will add:

In winter, you should have:

How to learn french

The number of words a person knows is one of the most reliable indicators of his/her current level. Assuming, of course, that you learn the right words. When starting to learn French or another language, you can use an app or a language learning software.

To help you make an informed choice you might want to look at this research on the best language learning software where 30 software were analyzed. Based on the in-depth review in terms of cost, educational model, customer experience as well as other additional features, the study narrows the choice down to five options.

To better learn French you have to leverage the right methods and strategies to progress fast. Check the tips in our article on how to learn french better. You’ll discover the top 5 tips that you need in order to learn French faster and better.

Keep growing your French vocabulary with Master Your French.

Be sure to subscribe to our newsletter so that you don’t miss future French vocabulary articles.

You can always check our full French vocabulary list.