For French learners, one of the main difficulties lies in the pronunciation of the letter E in French. When to pronounce E in French? When E is silent in French? The mute E is also known as “silent E” in English, “e caduc” or “e instable” in French. In the following, we’ll be using the term « mute E » as it’s also widely used in English. This lesson and its video will help you learn the right pronunciation of French words with the letter E.

In this post, you’ll discover everything that really matters when it comes to pronouncing the mute E in French:

How to write the mute e in French?

The phonetic symbol for mute e is /ə/. It’s always written with the letter e, for example :

There are some exceptions where the sound /ə/ is present without the letter e. For instance, the first syllable of the following words that are derived from the verb “faire”:

It’s also the case in the pronunciation and spelling of the French word “monsieur”:

How to Say the mute e in french?

The way the vowel /ə/ is pronounced varies from one person to another. Indeed some people have very similar pronunciation for the 3 phonemes:

But one thing is mainly different: the sounds  /ø/ or /œ/ are never omitted whereas the mute E can often be omitted in French.

You need to learn the four rules below that explain everything you need to know about the mute E in French. In particular, the cases where E is:

Watch the following video to learn everything you need related to the French Pronunciation of the letter E.

A Video About The Pronunciation of the French Letter E

You’ll learn that, within a group, the letter E generally is pronounced if it’s preceded by at least two pronounced consonants. At the end of a word, the letter E is usually not pronounced in standard French. Follow my advice and start applying them to get the right French pronunciation. 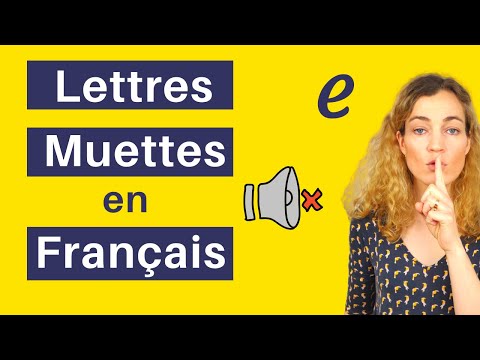 The letter E within the first syllable of a group is generally pronounced:

Rule 2: Letter E Within a group and between 2 consonants

Rapid speech: When To Drop The Letter E in French

In conversation, the E of the second monosyllable is frequently dropped.

Rule 3: Letter E Within A Group And after 2 Consonants

Within a group, the mute E is pronounced if it’s preceded by two or more pronounced consonants and followed by one consonant sound.

Rule 4: Letter E at the end of a group

The mute e is usually not pronounced at the end of a group.

When the second word has more syllables, the pronunciation of the mute e is optional.

Note that in some regions in French, in particular the South of France, the mute E is regularly pronounced.

Sometimes we add a mute E that doesn’t exist after 2 consonants:

In this article, we covered the mute E and when you should pronounce the sound /ə/ or when it’s dropped. If you enjoyed the content of this article as well as the video you can also check our article on silent letters in French.