How to speak French fast: RE / LE at the end of the word

November 15, 2021 by Mylene in Pronunciation Lessons

Written French is different from the French spoken in everyday life. Do you listen to French series and you get frustrated because you don’t understand what is being said? While you have been learning French for several years? This is completely normal! There are rules that you must learn and, above all, have to understand in order to improve your listening comprehension!

In this article, you will find out that the letters RE and LE can disappear at the end of a word in the spoken language. Please note that you cannot delete these letters in all the words. You have to take into account the structure of the sentence. These rules are generally not taught in schools! Learn the rules and practice thanks to the audios and the video.

In what follows you will learn: 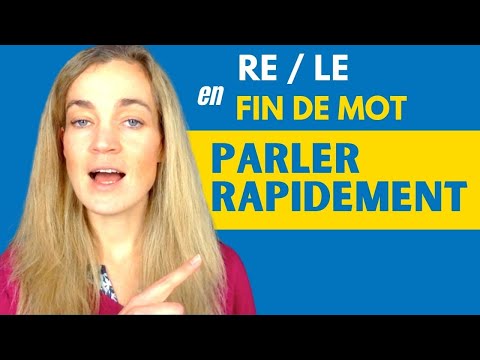 First, we will cover the cases where the letters RE / LE are at the end of a group of words or a sentence. As you most certainly know, the letter E is not pronounced at the end of a word. This is the silent E. The consonants R and L have a particular role compared to the other consonants. We will study one of their specificities below. When a word ends with a consonant followed by RE or LE you must pay attention not to pronounce RE and LE.

Words ending with RE/LE within a group of words

We do not pronounce the letter E at the end of a word. The R/L consonants will be pronounced with the vowel of the following word.

A new phenomenon will occur which is called the apocope. This is the removal of an element at the end of a word. If you do a careful reading, a presentation, you will keep the pronunciation of the silent E at the end of the first word.

In everyday life, French speakers will not pronounce the letters RE.

You can remove the letters RE and LE at the end of a word only if R and L are after another consonant. For example, in the word “autre”, the consonant R is found after the consonant T so you can suppress RE orally.

In the previous section, we just learned that:

Now in this situation, you will have 2 consonants side by side.

The deletion of the letters RE / LE can also occur within a word.

Practice to improve your level of French

Knowing the rule is the first step in your learning. You must now practice what you have just learned. Master Your French has a program dedicated to learning the spoken language. Subscribe to the newsletter to be informed of news.

The Rhythm of the French Language + Video + Exercises