A Guide To Learn Colors In French​

One of the things I’m asked about most often is how to talk about colors in French and how to pronounce them. So now, if you’re learning the French language let’s discuss and learn how to name colors in French!

This lesson will teach you the most important French colors that language learners should equip their vocabulary with. These are essential words and are part of our beginner’s guide to learn French vocabulary.

In this post, you’ll learn the following colors in French:

The most common colors in French

Colors play an important role in the French touch from dressing, and makeup to nail polishing and French pastry.

The illustration below depicts the most common colors in French along with the corresponding English/French translation.

How to name colors in French

As any blog post about colors should, I’ll list the most common colors name in French and then I’ll give additional examples for every color.

How to say Blue in French

Blue in French is bleu. Blue is one of the cool calm colors. People enjoy being outside on sunny days when the cloudless sky is blue and bright. Blue color can be light (clair) or dark (foncé). For example, while bleu ciel is a light color, bleu marine is a dark one.

As in the examples below, bleu follows the gender of the noun it describes. When it is feminine, bleu takes a silent e at the end of the word and it becomes bleue. In plural, a silent s is added as in bleus (masculine+plural) and as in bleues (feminine+plural). This rules applies to most of colors besides few exceptions. One of these exceptions is the white color in French.

White is the next color that we’ll study.

How to say White in French

White in French is blanc. White is the color that gives a feeling of space and lightness. It is often associated with minimalistic looks. White is one of the three colors of France’s flag. Blue and red are the two other colors.

In French, the c in blanc is a silent letter, it is not pronounced. Blanc, the white color in French becomes blanche with an additional “he” at the end of the word. This is the exception to keep in mind when using blanc as an adjective to describe a feminine noun. This doesn’t apply to other colors since the majority takes an “e” at the end of the word, except the colors that already end with “e” like rouge (red).

Let’s talk now about the red color in French!

How to say Red in French

Red in French is rouge. Red is a warm exciting color. It is found in the names of some famous attractions in France like le moulin rouge. Besides the red color in France’s flag, French children know very well the red color with the story of “petit chaperon rouge” which refers to the story of the Little Red Riding Hood.

Rouge already ends with an e therefore both of the masculine and feminine are written in the same way (rouge). As expected, an s is added at the end of the word in the plural context (rouges).

Red has many color nuances it can be rouge clair (light red) or rouge foncé (dark red). One of these nuances it the well-known dark red is “Bordeaux” as the wine of Bordeaux. In English Bordeaux, the color, translates to “burgundy” (which is another region in France also famous for its red wine!).

How to say Yellow in French

Yellow in French is jaune. People who usually like bright sunny colors also love the yellow color. The world around us is full of yellow things. Let’s see some examples.

Sentences in French with Yellow:

Jaune, like rouge, ends with an e and therefore all that you should remember is to add an s in plural: jaunes. Another thing to keep in mind is that you can add a noun after the color. By describing yellow objects this way, you can speak about “jaune canari” which means literally “yellow canari”. Also about “jaune citron” and it translates to “yellow lemon”.

How to say Green in French

Green in French is vert. The color green is found in nature:

It is a relaxing color. This color is also found in foods:

and is also part of many other things in our world:

Below are examples of green/vert in the context of masculine/feminine and singular/plural.

Now, it is the right time to introduce another French grammar rule. When an adverb is used with a French color, the color no longer has to agree with the noun that it describes. For example:

How to say Orange in French

Orange in French is orange. Orange color can be seen in nature. In French, in English, and in German orange refers to the color as well as to the fruit. It is very easy to remember!

When it comes to gender or quantity, the color orange (orange) never changes. If it helps, remember that whenever a color is derived from an object (fruit, stone, etc.) it remains unchanged regardless of the word that it is describing.

How to say Brown in French

Brown in French is marron. People often associate brown with Earth as it’s the color of soil, stone, wood, and many other life forms.

Sentences in French with Brown:

Recall, when you learn French colors, you also learn the name of some fruits. In this case, marron is a fruit in French and consequently it remains unchanged regardless of the noun it is modifying.

Let’s move to the pink color.

How to say Pink in French

Pink in French is rose. What’s the difference between “le rose” and “la rose”? Le rose is the pink color while la rose refers to the flower (la fleur). Rose is also a proper name. In most situations, pink has strong associations with niceness, innocence, and sensitivity.

Sentences in French with Pink:

And, of course, be aware that rose (pink) takes an s when the word it is modifying is in the plural. This doesn’t follow the same rule as in orange and marron.

How to say Black in French

Black in French is noir. The black color is found in nature. Many spiders, like tarantulas, are black. In fashion, many designers consider black as a glamorous color. Many other terms in French contain the word black, such as le trou noir (black hole), le chocolat noir (dark chocolate), etc.

Below are examples of black/noir in the context of masculine/feminine and singular/plural.

How to say Gray in French

Gray in French is gris. Gray is a cool, neutral, impartial color. While gray is present in many office settings, it is also found in nature, and in clothing.

Below are examples of grey/gris in the context of masculine/feminine and singular/plural.

How to say Purple in French

Purple in French is violet. Purple is a popular color in nature. Violette is also the name of a flower in French.

Below are examples of purple/violet in the context of masculine/feminine and singular/plural.

Most of the time when we talk about colors, French language learners are told to memorize color names as another list of vocabulary. Of course, that is fundamental to grown one’s vocabulary and a fantastic plan to master the list of common colors in French but personally, I consider that this is not enough.

Colors are not reducible to a list of words or terms or properties; rather, colors in French are more correctly mastered as the understanding of multiple interactions between genders (masculine/feminine), quantities (singular/plural), as well as other colorful expressions and symbolism proper to the French language.

A video to learn colors in French

Learn French colors and their correct pronunciation by watching the video below.

You’ll learn how to say the principal colors along with the clothes vocabulary in French:

Click below to watch the video about colors and their pronunciation in French. 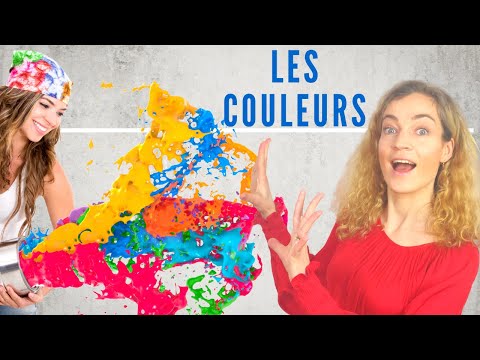 What about multicolor in French

Multicolor in French is multicolore. It is great to learn French colors but in many cases, multicolor is useful when referring to something that includes more than one color. For instance, un arc-en-ciel (a rainbow), les aurores boréales (the northern lights), or les macarons (macaroons) as in the image below that shows some multicolored wonderful macaroons.

Now, let’s go over a number of casual everyday French expressions that you can use in your daily conversations. Also, this will help you better understand the context whenever these color-related expressions are used by other French speakers. Learn French colors in expressions:

Beyond colors in French

If you’re studying French and you’d like to learn how to count, check out our article about numbers in French.

Now it’s time to explore the many benefits that Master Your French has to offer. So join me in the online French courses!

Learn to Talk About Seasons in French