Common French Greetings to Learn and Mistakes to Avoid

It’s time to study French, a language that many children and adults would love to learn. Among the essential vocabulary are words such as hello and goodbye, both of them, according to many language specialists, come at the beginning when learning a new language.

Beyond learning French greetings, understanding the first words in a language is fascinating. It is the moment when noise becomes signal, a signal that holds meaning, and a message, that once exchanged, becomes a conversation.

French greetings represent an important first step of every learning journey. There are many ways to say hello in French but not all of them are appropriate to every situation.

In this article, we’ll cover many French greetings words that you should know as well as some typical mistakes to avoid!

Besides this article, I prepared a video on the topic of French greetings.

Just as you have to grow your French vocabulary, so do you need to learn various French greeting words for various situations.

A situation is unique because each one is associated with different people, different places, different levels of formality in the communication, and of course at different times of the day.

For each situation, we have a few options – that’s what makes French greetings so interesting and so much fun!

How to say good morning in French?

Good morning in French is Bonjour.

What does “bonjour” mean?

The origin or the word Bonjour comes from the combination of bon + jour:

At that time, many articles report that “bon jor” was used in a way to wish a “favorable day“.

Only around the 13th century that the word “bonjour” entered the words of everyday greeting in French.

When to use “bonjour”?

Saying bonjour in French is similar to saying good morning or hello in English.

As it is a polite way to greet in French, it can be used safely in many situations such as in:

If you want to sound polite, you can add monsieur, madame, or demoiselle after bonjour.

Here is one example: Bonjour madame (instead of just saying bonjour).

The nice thing about this greeting is that bonjour is an acceptable informal greeting in French.

For instance, it is totally common to greet family members or friends with bonjour.

Be sure to use this French greeting during the day and you’ll be fine.

Let’s see next the French greeting to use when the end of the day approaches.

How to say good evening in French?

Good evening in French is Bonsoir.

What does “bonsoir” mean?

Bonsoir is also a French greeting composed of two words bon and soir:

When to use “bonsoir”?

Bonsoir is another French greeting word that carries the same intention and meaning as bonjour.

Bonsoir is the equivalent of Bonjour but used at night! Again, it is a polite French greeting word.

In the day time, you can use bonjour. But after a certain hour of the day bonsoir becomes more appropriate.

As the end of the day approaches, switch from saying bonjour and start saying bonsoir.

There is no exact time to switch from bonjour to bonsoir but it is usually between 5 pm and 6 pm that the use of bonsoir becomes acceptable.

One major difference is that bonsoir can be used to say goodbye, whereas bonjour never is.

How to say have a nice day in french?

To wish someone a nice day, just say “Bonne journée“.

What does “bonne journée” mean?

It is clear that this greeting has two distinct words: bonne and journée:

When to use “bonne journée”?

Use this french greeting phrase to wish a good day upon leaving.

By saying bonne journée you’re wishing to the other person(s) a nice day.

This French greeting can be used in different situations, including formal and informal ones.

According to the time of day, use bonne journée to wish someone a good day (from early morning until mid-afternoon).

If you’d like to wish a good afternoon, you can say bonne après-midi.

Again, when the day approaches its end, you’ll have to switch to either bonne fin de journée, which means have a nice end of the day and it is a good alternative starting mid-afternoon, or to bonne soirée to wish someone a good evening.

Check this related article to learn the different ways of asking for and telling the time in French.

How to say goodbye in French?

Goodbye in French is “Au revoir“.

What does “au revoir” mean?

Au revoir is made of two words:

Au plaisir de se revoir is another French expression with the word “revoir” that can be used upon leaving while expressing the pleasure (plaisir) to meet again.

When to use “au revoir”?

Are you going to meet again this person?

Even if no meeting is planned, you can use au revoir as the go-to standard salutation to say goodbye.

This expression highlights the likelihood of meeting again the other person in the future.

In many cases, when saying goodbye to someone you’ll probably meet again, au revoir is a good alternative to bonne journée. Both are nice and polite French greeting words.

French greetings throughout the day (A video)

Check the video below: While you listen to the French pronunciation, you’ll also learn four french greeting words that you should absolutely know as well as some typical mistakes to avoid!

Learn when to say Bonjour and Bonsoir and understand when to, and when not to, greet people in France! 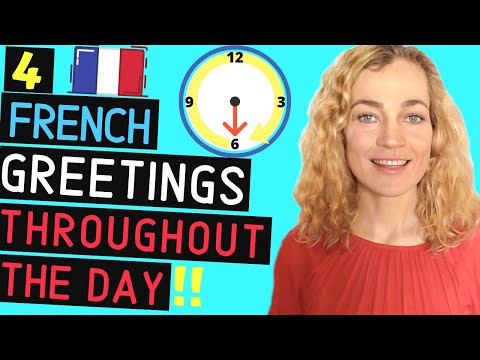 Salut is the equivalent of hi in English.

A familiar way of saying good morning is salut. It is an informal French greeting word that is commonly used among friends and family members.

Salut can also be used to say hello in French to your friend as well as to say Bye Bye. It works both ways and at any time of the day.

Note that the -t on the end of the word “salut” is silent and consequently is not pronounced.

Coucou is an alternative greeting to Salut.

It is another youthful way to say Hi in French at any time of the day.

Be aware that it is more informal than salut.

Most of the times it is a greeting used between close friends and family members!

It is also a suitable French greeting when talking to children.

How to greet in French Throughout The Day?

The infographic below will help you understand when best to use the most common formal and informal French greetings.

Make sure that you understand which one to use at what time of the day by following the advice and tips I outlined above and added to the infographic below.

Here are some French greeting mistakes to avoid when:

Next time you travel to France you’ll know how to say hello and greet people in French! It is great that you have mastered the art of the basic French greetings.

To learn more vocabulary with Master Your French check our beginner’s guide to learn French vocabulary.

Be sure to subscribe to this newsletter so that you don’t miss future French lessons. And before you go, if you enjoyed the content of this article as well as the video subscribe to Master Your French on YouTube. Au revoir!!