Diving into the analysis of the spoken language is a practical way to help French learners to improve their pronunciation and enhance their spelling skills. This article is a practical pronunciation exercise that focuses on analyzing the French spoken language. It’s based on two approaches: the first is the study of the natural way of speaking French and the second is to better understand the rules around French pronunciation. The majority of French learners would need these two notions in order to boost their confidence when it comes to speaking French. Be sure to watch the video to listen to how the sounds in French are pronounced.

Before getting into the details, let me briefly introduce a few concepts that are essential to master French pronunciation:

Does reading practice improve the pronunciation?

A reading practice exercise is usually divided into multiple steps. There are two main steps that help improve pronunciation in French. These steps that you need to focus on:

When reading slowly you will discover:

During the quick reading, which is the second step, you will discover:

To fully benefit from this French reading exercise

In the video associated with this practice lesson, you’ll find a color code to follow:

To fully benefit from this French practice reading exercise, the advice is to go through the video multiple times:

Practice with the video 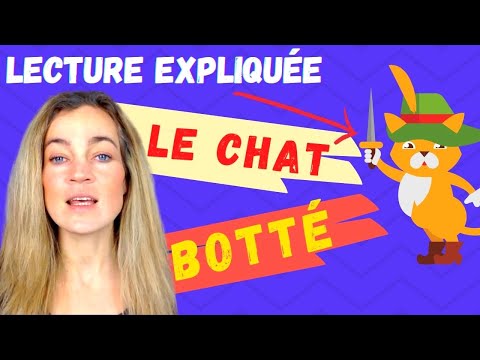 The Master Cat, or, Puss in Boots by Charles Perrault

The following text can be found here. To read the text in French, you can refer to the French version of this practice reading.

There was a miller whose only inheritance to his three sons was his mill, his donkey, and his cat. The division was soon made. They hired neither a clerk nor an attorney, for they would have eaten up all the poor patrimony. The eldest took the mill, the second the donkey, and the youngest nothing but the cat.

The poor young fellow was quite comfortless for having received so little. “My brothers,” said he, “may make a handsome living by joining their shares together; but, for my part, after I have eaten up my cat, and made myself a muff from his skin, I must then die of hunger.”

The cat, who heard all this, but pretended otherwise, said to him with a grave and serious air, “Do not be so concerned, my good master. If you will but give me a bag, and have a pair of boots made for me, that I may scamper through the dirt and the brambles, then you shall see that you are not so poorly off with me as you imagine.”

The cat’s master did not build very much upon what he said. However, he had often seen him play a great many cunning tricks to catch rats and mice, such as hanging by his heels, or hiding himself in the meal, and pretending to be dead; so he did take some hope that he might give him some help in his miserable condition.

After receiving what he had asked for, the cat gallantly pulled on the boots and slung the bag about his neck. Holding its drawstrings in his forepaws, he went to a place where there was a great abundance of rabbits. He put some bran and greens into his bag, then stretched himself out as if he were dead. He thus waited for some young rabbits, not yet acquainted with the deceits of the world, to come and look into his bag.

He had scarcely lain down before he had what he wanted. A rash and foolish young rabbit jumped into his bag, and the master cat, immediately closed the strings, then took and killed him without pity.

Proud of his prey, he went with it to the palace, and asked to speak with his majesty. He was shown upstairs into the king’s apartment, and, making a low bow, said to him, “Sir, I have brought you a rabbit from my noble lord, the Master of Carabas” (for that was the title which the cat was pleased to give his master).

“Tell your master,” said the king, “that I thank him, and that I am very pleased with his gift.”

Another time he went and hid himself in a grain field. He again held his bag open, and when a brace of partridges ran into it, he drew the strings, and caught them both. He presented these to the king, as he had done before with the rabbit. The king, in like manner, received the partridges with great pleasure, and gave him a tip. The cat continued, from time to time for two or three months, to take game to his majesty from his master.

One day, when he knew for certain that the king would be taking a drive along the riverside with his daughter, the most beautiful princess in the world, he said to his master, “If you will follow my advice your fortune is made. All you must do is to go and bathe yourself in the river at the place I show you, then leave the rest to me.”

At this noise the king put his head out of the coach window, and, finding it was the cat who had so often brought him such good game, he commanded his guards to run immediately to the assistance of his lordship the Marquis of Carabas. While they were drawing the poor Marquis out of the river, the cat came up to the coach and told the king that, while his master was bathing, some rogues had come by and stolen his clothes, even though he had cried out, “Thieves! Thieves!” several times, as loud as he could. In truth, the cunning cat had hidden the clothes under a large stone.

The king immediately commanded the officers of his wardrobe to run and fetch one of his best suits for the Lord Marquis of Carabas.

Learning the pronunciation on your own can be very difficult. You need someone to explain to you where your mistakes are. This video is very educational but to overcome all your French pronunciation difficulties book a study session to receive personalized advice.

A Guide to Silent Letters in French