How does a French Say Nice to Meet You?

“James, I’d like to introduce you to Hélène. As I already told you, she lived in France for many years and she’d be happy to help you start your new project in Paris. Good luck! I’ll let you two take it from here.”

At this point, James would say “Nice to meet you Hélène”.

Nice to meet you in French

In this article, I’ll give you many expressions to say nice to meet you in French. Among these expressions, you’ll find:

Greeting with Nice to meet you

In some cases, we are fortunate enough to be introduced to someone who can help us professionally. Other times, it is a personal context where we’re meeting someone new. Whether a professional or a personal introduction, it is important to know what to say, and how to think and act.

Remember, it is essential to learn greetings as it plays an important role in the interpersonal relationships of many cultures such as French, American, or Japanese.

In reality, introductions are the first step of befriending a new person. Ultimately, learn how to say nice to meet you in French is what you need in order to start a successful exchange and help you avoid awkward situations when you don’t know what to say.

When to use Nice to meet you?

In this article, I’ll teach you how to say nice to meet you in French. Informal or formal exchanges can create successful relationships and feel comfortable is what matters most when meeting someone for the first time.

Learn to say Nice to meet you

Click to watch the video below if you’ve ever wondered what to do when you first meet someone in person in France.

Should you extend your hand to give a handshake? Should you hug the other person? Or you should kiss, la bise, which is an integral part of the French greeting culture. No doubt that these are common questions most non-native French have.

Again, since pronunciation is of major importance at Master Your French, I’ll show you the right pronunciation of nice to meet you and its comparable expressions. If you’d like to check other expressions and greetings in French, check the brief guide to learn useful French expressions.

Nice to Meet You in French (Video) 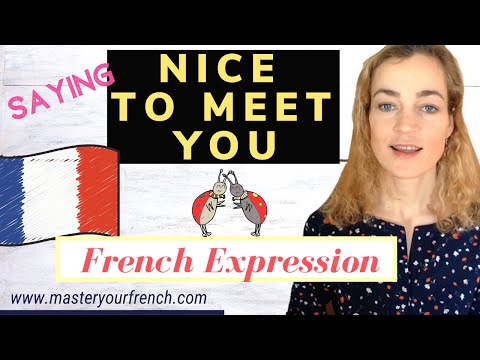 Various expressions to say nice to meet you

Below is a list of diverse ways to say nice to meet you in French. Use these phrases when you meet someone for the first time and don’t forget to smile 🙂.

Expression with a compliment:

As you’ll use these phrases almost every time you encounter a new person, let’s dive into their meaning and when to use each of these expressions.

The casual nice to meet you in French

What does enchanté(e) mean in French?

The formal nice to meet you in French

Je suis ravi(e) de faire votre connaissance is another way to say nice to meet you in French. Use it whenever you want to sound formal.

The pleased to meet you in French

Now, if you had a pleasant discussion with someone you can use “Ça me fait plaisir de discuter avec vous“. This expression translates to “I was pleased talking to you”.

If you’d like to express pleasure and also highlight a real feeling of happiness, your best choice is to say “Heureux(se) de faire votre connaissance“.

The French nice to meet you with a compliment

Time to go for compliments? Then you can say “On m’a beaucoup parlé de vous” which translates to “They told me a lot about you” or “I heard a lot about you”. In this case, it is a way of saying nice to meet you and at the same time making a compliment to the other person. The other person would reply “en bien j’espère” which is the typical reply of a French native. (Bien sûr, of course!)

Of course, you can aim the top and make a compliment with “Je suis honoré(e) de faire votre connaissance” but think about this well. In which situation would you want to say that you are honored to meet someone? It is rare but you might need it one day. Who knows!

The nice to e-meet you in French email

What if you’d like to write nice to meet you when composing an email in French. Imagine that you’re writing an email and you’d want to say that you’re delighted to meet someone at a certain date.

That should be easy for you now but the subtle choice of the verb tense can make it tricky to say nice to meet you through email. In this situation, the meeting, or e-meeting, will happen in the future which is different from greeting someone you just met.

The recommendation is to use le conditionnel, not the future tense when writing nice to meet you in French. Email and use the French conditional tense which allows you to show that you’re not giving direction to the other person. Instead, you’re just expressing a wish to meet together in a solicitous way as follows “Je serais ravi de vous rencontrer“.

Infographic in French: 10 expressions to say nice to meet you

It is always a pleasure

It’s important to learn the proper way to say nice to meet you in French because making a good first impression is essential in many situations.

Whether a social event or a business meeting, using appropriate expressions could be very helpful when making initial introductions.

It could help you make a new friend, boost your chances in a business deal, or even elevate you in the eyes of the person you just met.

If you’re starting to learn French, you should build your French with the basics of common words, expressions, and pronunciations. Check our brief guide to learn useful French expressions.

In addition, check our videos on Instagram and on YouTube. You’ll find a lot of learning materials to help you boost your French language skills.

Are you ready now to nail that next introduction in French? That’s what Master Your French online courses help you achieve.